VoIP security – why is it so important? 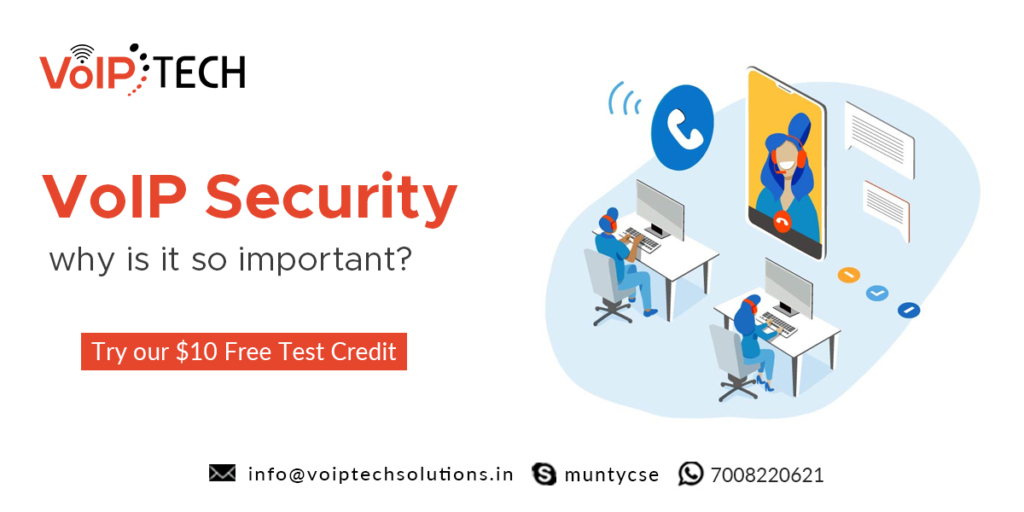 VoIP security is an important cause, and it is the latest technology in
worldwide businesses. VoIP is known for its secure data communication over
a system.

VoIP (Voice over Internet Protocol) is quickly becoming the new standard for
business phone systems. Conducting business over the phone is faster,
sharper, and more comprehensive for businesses of all sizes.
Whatever the size of your company, security is critical to its survival. Voice
over IP (VoIP) introduces new security risks, but there are still ways to
improve your company’s security by using VoIP rather than traditional
handsets.
Security is a critical asset for any organization. This tool is intended to assist
you in getting the most out of VoIP while also maximizing your security. VoIP
has a plethora of advantages, one of which is security; however, this all
comes down to properly managing your security and accounting for the new
risks that arise when using VoIP technologies.
Given the increasing prevalence of cybercrime around the world, security
has never been more important. Fraud calls, cyber attacks, malware, and a
variety of other online security threats are causing businesses to lose money
at an alarming rate, owing to vulnerable loopholes that could easily be closed
with a more secure alternative.
Simply put, your company’s telephone system does not have to be a source
of concern when it comes to security. Understanding the significance of VoIP
security and taking steps to set up a secure VoIP provider is the best way to
ensure your safety, and we’ll walk you through the details.

What is VoIP security?

When VoIP systems were first introduced, security was given little thought.
However, due to the widespread adoption of VoIP in the market, an
emphasis on security must be placed. Although security measures are not
perfect, they can significantly reduce the risk of DDoS attacks, service
interruption, and eavesdropping scenarios. Spam and, in some cases,
identity theft is also possible on insecure VoIP networks.

Why is VoIP security important?

Security is critical to both business success and compliance, and with a VoIP
phone system, it’s now easier than ever to achieve.
Unlike legacy systems and traditional handsets, which rely on office network
security, VoIP is a flexible and dynamic offering that supports hybrid working.
However, VoIP must be protected against cyber threats, and precautions
must be taken to reduce the likelihood of a hardware attack or a data breach.
While technology continues to evolve and advance around us, so do the
cyber threats we face. As a business, it’s critical not to bury your head in the
sand, but rather to stay ahead of the curve by implementing comprehensive
cybersecurity measures – which is where VoIP comes in. It is more important
than ever to ensure that all calls, whether in the office or off-site, are secure.

Traditional analog phones send and receive calls over the PSTN network,
which is composed of copper wires and fiber optic cables. In other words,
the caller and the recipient have a physical connection.

Unauthorized persons hack into the wires/cables to gain access to landline
phones. Protecting against this is not only more difficult than with VoIP, but
also much more expensive.
Traditional or landline security is severely hampered by a lack of technology
and monitoring capabilities, both of which VoIP systems have in abundance.
While landlines appear to be more secure on paper, VoIP systems provide
a higher overall level of security as long as you use the tools it provides, such
as VoIP encryption.
So, VoIP is more secure than traditional systems.

Knowing what might be out there is the best way to keep your VoIP system
secure. Unfortunately, a VoIP vulnerability exposes you to a wide range of
threats that could range from a minor annoyance to a full-fledged security
breach.
Fortunately, knowledge is power, and we’ve compiled a list of some of the
more credible VoIP security threats to assist you in understanding how to
protect yourself in real-time. Here are some of the most serious VoIP security
threats and their consequences:

Hackers can use packet sniffing to steal and log unencrypted data from voice
data packets as they travel.
It can easily intercept usernames, passwords, and other sensitive
information as a result of this vulnerability.

DDoS (Distributed Denial of Service) attacks, as the name suggests, prevent
businesses from using their VoIP services by overloading servers.

Vishing is a type of VoIP-based phishing in which a hacker impersonates a
trusted phone number or source to get you to reveal sensitive information
such as passwords, credit card numbers, and other personal information.

Malware and viruses wreak havoc on internet-based applications like VoIP,
causing a slew of network security problems. These harmful programs
consume network bandwidth and cause signal congestion, resulting in signal
failure for your VoIP calls.

Phreaking is a type of fraud in which hackers gain access to your VoIP
system and use it to make long-distance calls, change calling plans, add
more account credits, and make any other phone calls they want — all on
your dime.

SPIT, or Spam over IP Telephony, is similar to phishing and other forms of
spam in emails.

SPIT is a collection of prerecorded messages sent over VoIP phone
systems. These calls are primarily an annoyance that ties up your virtual
phone numbers, but spam also carries risks such as viruses, malware, and
other malicious attacks.

When a hacker places themselves between your VoIP network and the call’s
intended destination, this is known as a man-in-the-middle attack.
This is most common on public or unprotected WiFi networks. Hackers or
Unauthorized persons can easily intercept the phone call and reroute it
through their servers, where spyware and viruses can be easily infected.

Toll Fraud is similar to a phishing attack in that hackers make an excessive
number of international calls from your business phone system to profit from
a portion of the revenue generated by the calls.

Call tampering isn’t as serious a cyber attack as some of the others on this
list, but it still has a significant impact on how you conduct business.
When a hacker puts additional noise packets into the call stream, the call
quality is immediately ruined, forcing both parties to hang up. These hackers
can also prevent packets from reaching their intended destination, resulting
in sporadic, garbled service and extended periods of silence.

VOMIT (Voice over Misconfigured Internet Telephones) is a VoIP hacking
tool that converts conversations into files that can be played anywhere,
making it simple to steal data from your business phone system.
This type of eavesdropping not only steals data from your system, but also
assists the attacker in gathering business information such as call origin,
passwords, usernames, phone numbers, and bank account numbers.

How to secure our VoIP?

Call centers must educate themselves on VoIP security. Their company’s
survival is heavily reliant on the network’s performance and dependability.
Network firewalls and data encryption protocols reduce the risk of a security
breach and/or service interruption. As previously stated, no VoIP phone
system is impenetrable, but conducting routine assessments of your network
and phone equipment will help to eliminate DDoS, eavesdropping, and spam
attacks. A multi-layered approach is required, but if security measures are
implemented correctly, call centers will become resistant to malicious
attackers.

Call centers use IP networks to send sensitive information. Cyber thieves
can intercept data packets as they travel across the internet. Encryption
makes it difficult for cyber thieves to accurately read the data. When
encrypted data travels across a network, it is decrypted and converted back
to its original code. Encrypted data is referred to as “cipher text” by IT
professionals. Data that is not encrypted is referred to as “plain text.” To
prevent network intrusion, call centers that use a VoIP predictive dialer to
place outgoing calls automatically must implement some form of border
patrol.

A VoIP dedicated server is used by most call centers to route a high volume
of incoming and outgoing calls. As a result, a firewall program must be
installed between the VoIP dedicated server and the outside network. The
firewall acts as a barrier, directing incoming and outgoing traffic. Advanced
firewalls will detect and block suspicious data packets coming from IP
addresses that may or may not be attempting to launch a DDoS attack
against your system. In this case, a load balancing server setup may also be
useful. A DDoS attack floods the telephone network with so many
unexpected service requests that the entire system becomes unavailable for
some time.

A virtual private network (VPN) is an excellent way to protect data while it is
being transmitted over the internet. It functions similarly to an internal
network in that it creates a secure network over which data can be
transmitted. Using VoIP over a VPN protects the SIP and makes them nearly
untraceable.

NAT is a router feature that gives phones, laptops, and other internet connected devices their IP address. The private IP address is only visible
within your LAN. A network cannot be remotely compromised if a hacker is
unable to identify an IP address. A public IP address on a VoIP phone makes
it vulnerable to cyber-attacks.

A strong password is the foundation of cybersecurity. As a result, you must
ensure that the passwords on routers, servers, IP switches, and firewalls are
strong.

One of the most effective methods for ensuring that data sent over the
internet cannot be decrypted, even if it is intercepted, is encryption. This is
particularly useful if your end-users, partners, or clients are having important
discussions that could jeopardize their reputation if the details are revealed.
Make certain that the VoIP and SMB services are encrypted. As a result,
encrypting data at multiple points makes it difficult for hackers to gain access.

Regularly conduct network penetration testing. When an IT professional
intentionally hacks a system to see how vulnerable it is, this is referred to as
a cyber security methodology. Once the flaws have been identified, they can
be fixed, allowing your entire IT infrastructure to be strengthened.

VoIPTech solutions provide the best VoIP solutions for startups, small
businesses, large enterprises, etc. VoIP is secure, easy to use, and available
at an affordable cost.
VoIP is always a more securable number than traditional systems.
Call our team today for more information.